On October 1st a new hold sequence in Koha is going to be implemented.  There are plans to implement a larger change that will adjust how all LINKcat libraries are listed in the sequence, however on October 1st only the MPL part of the changes will be implemented as a trial to see if what these changes are hoping to improve actually do so.

Because this is being done as a trial with MPL to start, it is likely this will impact the size of each branch's Holds Queue Report.  An increase in the size of the branch's Hold's Queue Report will be one of the indications that what is being tested is working.  However, if there is too large of an increase and it is reported it is negatively impacting branches beyond what can handled, SCLS is will be able to return the sequence immediately back to how it currently exists.

The new sequence will have a hold request from an MPL patron be searched at all the MPL locations before searching other LINKcat libraries.  The larger sequence change that is planned has this concept happening on a county by county level.  For example, this means that a request of any patron of a Sauk County library will be searched to see if the item can be found at one of the Sauk County libraries before moving on in the sequence to search other LINKcat libraries.  The analysis at this time is when this is further implemented throughout the system, increases in the size of the branch's Holds Queue Report will be alleviated from other libraries being grouped together like MPL.

Currently there are imbalances among LINKcat libraries in regards to which libraries are net lenders and which are net borrowers.  It is a goal of the sequence changes to make sharing more equitable among LINKcat libraries.  Also, it is hoped that the proposed sequence we are testing will also improve efficiencies at SCLS Delivery.  For Madison locations, because of the frequency of service received from SCLS Delivery, if more requests from Madison patrons are found at Madison locations, the turnaround time will be faster and patrons will receive requested items even more quickly than they currently receive them.

Final Testing of LibLime 4.14 To Begin

With most of the fixes in place for the Solr indexing upgrade, we are ready to begin the final phase of testing for the LibLime Koha 4.14 implementation.  ILS staff will be sending out emails to module lists asking for volunteers to run through the testing checklists.  If all goes well, we plan to upgrade to 4.14 in the next two weeks.

After a hiatus this summer, we are back to reporting the LINKcat news.  Here is a catchup blog post.

For the most current news, see the ILS Support Main page. 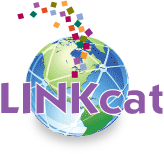 In June we launched a new "slideshow" for the home page of LINKcat. The slides change monthly and include information about new features, databases, Don't Miss Lists, search tips, planned downtime, and other useful LINKcat information.

We are always looking for new slideshow ideas. We've created a Google document where you can share your ideas for useful LINKcat tips to be included in the slideshow. Please keep in mind that the tips have to be communicated in a short sentence and should include a visual representation. Complex ideas could be broken down into separate parts so each part could be communicated on a separate slide.

The PAC subCommittee made a recommendation to hide the "My Fines" tab in the PAC patron display because the tab led directly to the patron's Account screen, which displays all resolved and unresolved fines and charges in a patron's record.  The Circulation Services subCommittee agreed with the recommendation, requesting future development that will point the "My Fines" tab to a patron's Pay Fines screen, which only displays unresolved fines or charges.  The ILS Committee approved the recommendation and we will be making the change on Monday, October 8, 2012.

Here is an example of the new screen in the PAC, which can be seen when logged into the sandbox PAC.  Patrons are still able to access their balance from the Fines tab on the My Summary screen.  This tab only displays when patrons have unpaid fines or charges. 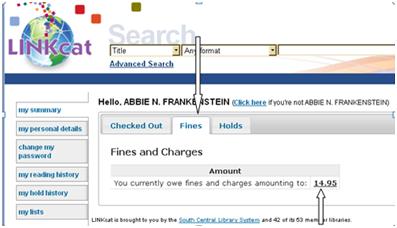 If patrons click on the balance owed, the hyperlink will take them to their full Account screen.

Please make certain all of your staff are aware of this change so they can assist patrons as needed.

Posted by Heidi Oliversen at 11:54 AM in Circulation, LINKcat (Searching, Etc.), Workflow and Tips | Permalink

The next upgrade to Koha will be a major re-write of Koha's indexing platform. The new software is now available for testing in the SCLS Koha sandbox (both staff client and PAC). If you would like to try it out, you can log into the sandbox using the same login and password that you use for Koha production.

The sandbox is a work in progress and additional fixes are still being added. After we have an upgrade date, we will post full release notes on the ILS web site.

Why are we switching to Solr?

Solr is an open-source search indexing platform that is faster and offers more flexibility than Koha's current indexing platform (Zebra). It fixes a number of searching bugs and will offer us the ability to create browse indexes in the future.

What are the new features and bug fixes that are coming with Solr?

Here is a list of fixed bugs and new features:

Are there any new search tips?

Are there any known bugs in the sandbox that aren't in production?

Yes, there are some bugs in the sandbox that are not present in production. These bugs will be fixed before we upgrade:

There may be more bugs present in the sandbox (that are not already in production). See the next section for information on helping out with testing.

How can I help with testing Solr?

Fill out the Solr testing checklist. If you cannot finish the entire checklist, that's fine, just do what you can and leave the other questions blank. Please complete any testing by Monday, October 1.

You can also report problems that you encounter in the sandbox using the Koha problems and questions form.

We are moving forward with two projects that will require startup fees in 2012.  There will be some ongoing costs in 2013 and beyond but these costs will not increase the technology or ILS fees for participating libraries in 2013.  We will be using Crystal Reports software to develop an end-user reports interface for Koha.  We are using a portion of the 2012 LSTA Public Library System Technology grant to finance the bulk of the startup costs for Crystal Reports, including procuring a server, server setup, software licenses, training costs and the consulting fees to develop some prototype reports.   The new server will be rolled into the ongoing server maintenance plan.  We may need to pay software maintenance, but for 2013 we would cover those costs out of ILS contingency or with the 2013 LSTA grant.

We will be contracting with Envisionware for online credit card payment for the LINKcat libraries.  Again, there are startup fees for this service, but they will be paid for out of the ILS contingency.  There is an annual maintenance fee with Envisionware and there will be transaction fees both for the merchant bank and with Envisionware, but these costs will be deducted out of the fines and fees collected before they are distributed to the libraries.

We look forward to bringing these two exciting services to the LINKcat libraries and we are pleased to be able to do so without an increase in the 2013 payments.

[This article is also being posted to the Technology News blog.  For those of you who read both, we apoligize for the duplication.]